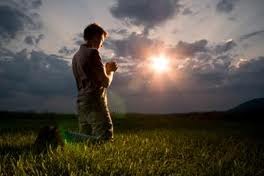 Our justification before God and before our fellow men is not the same. Before God we are justified by faith without works (Rom. 3:28; 4:5, 6). Before men we are justified by works and not by faith only (James 2:24). As soon as the sinner accepts Christ by faith, his name is inscribed in the Lamb’s book of life — he is registered as a member of the church universal. But in order to join the church on earth, something more than faith is required. He must show his faith by his works. Before heaven he is justified by faith. Before men he is justified by works.

Failure to understand the difference between justification before God and man has occasioned much misunderstanding over the interpretation of Paul and James. Paul declares that man is justified by faith. James says he is justified by works. Unless we understand that one is speaking of justification before God, and the other of justification before men, James would appear to flatly contradict Paul. But they were writing about different issues. Paul is concerned with the question, “How should man be just with God?” In Romans 3 he says that the whole world stands guilty “before God,” and that by works no man can be “justified in His sight” (Verses 19, 20). Then in the next chapter he continues, “If Abraham were justified by works, he hath whereof to glory; but not before God.” Rom. 4:2. It is therefore clear that Paul is dealing with justification “before God” — right standing “in His sight.”

James addresses himself to another problem. Here were professed believers hearing the Word without doing it. They were failing to bring forth the fruit of practical godliness. This was revealed in their attitude to their fellow men. So the apostle declared:

“What doth it profit, my brethren, though a man say he hath faith, and have not works? Can faith save him? If a brother or sister be naked, and destitute of daily food, and one of you say unto them, Depart in peace, be ye warmed and filled; notwithstanding ye give them not those things which are needful to the body; what doth it profit? Even so faith, if it hath not works, is dead, being alone. Yea, a man may say, Thou hast faith, and I have works: show me thy faith without works, and I will show thee my faith by my works.” James 2:14-18.

Notice that James is dealing with the matter of showing his faith:” . . . I will show thee my faith by my works.” If “faith” yields no fruit, it is not faith at all, but a counterfeit. So James continues:

“Thou believest that there is one God; thou doest well: the devils also believe, and tremble. But wilt thou know, O vain man, that faith without works is dead? Was not Abraham our father justified by works, when he had offered Isaac his son upon the altar? Seest thou how faith wrought with his works, and by works was faith made perfect? And the scripture was fulfilled which saith, Abraham believed God, and it was imputed unto him for righteousness: and he was called the Friend of God. Ye see then how that by works a man is justified, and not by faith only.” James 2:19-24.

In his justification with God, Abraham believed God, and that was counted unto him for righteousness. But how do we know that his faith was genuine? How do we know that God’s way of making men righteous in His sight is genuine? Abraham’s life of implicit obedience proves this. It requires faith to obey God in all things.

Writing on the problem of Paul and James, Luther declared:

“Insist on it, then, that inwardly, in the spirit, before God, man is justified through faith alone, without all work. But outwardly and publicly, before the people and himself, he is justified through works, that is, he thereby becomes known and certain himself that he honestly believes and is pious. Therefore you may call the one a public justification, and the other an inward justification, but in this sense that the public justification is only a fruit, a result, and a proof of the justification in the heart. Accordingly, man is not justified by it before God but must previously be justified before Him. Just so you may call the fruits of the tree the obvious goodness of the tree, which follows and proves its inner, natural goodness.

“This is what St. James means in his Epistle when he says (2:26): ‘Faith without works is dead,’ that is, the fact that works do not follow is a certain sign that there is no faith, but a dead thought and dream, which people falsely call faith.” —What Luther Says, vol.3, pp.1231, 1232.

Paul Justified by Works Before Men

Paul also knew that before men he was justified by his works. He frequently justified himself before the churches by recounting his works. To answer his critics, he magnified his office of apostleship and vindicated his course of action. In this manner of justification, Paul did not talk of his faith, but he talked of his works. To the Thessalonian believers he wrote:

“For our exhortation was not of deceit, nor of uncleanness, nor in guile: but as we were allowed of God to be put in trust with the gospel, even so we speak; not as pleasing men, but God, which trieth our hearts. For neither at any time used we flattering words, as ye know, nor a cloke of covetousness; God is witness: nor of men sought we glory, neither of you, nor yet of others, when we might have been burdensome, as the apostles of Christ. But we were gentle among you, even as a nurse cherisheth her children: so being affectionately desirous of you, we were willing to have imparted unto you, not the gospel of God only, but also our own souls, because ye were dear unto us. For ye remember, brethren, our labour and travail: for laboring night and day, because we would not be chargeable unto any of you, we preached unto you the gospel of God. Ye are witnesses and God also, how holily and justly and unblamably we behaved ourselves among you that believe.” 1 Thess. 2:3-10.

Thus was the apostle justified by his works before the Thessalonians. Then, to answer his critics at Corinth, he wrote:

“Seeing that many glory after the flesh, I will glory also. For ye suffer fools gladly, seeing ye yourselves are wise. For ye suffer, if a man bring you into bondage, if a man devour you, if a man take of you, if a man exalt himself, if a man smite you on the face. I speak as concerning reproach, as though we had been weak. Howbeit whereinsoever any is bold, (I speak foolishly,) I am bold also. Are they Hebrews? so am I. Are they Israelites? so am I. Are they the seed of Abraham? so am I. Are they ministers of Christ? (I speak as a fool) I am more; in labors, more abundant, in stripes above measure, in prisons more frequent, in deaths oft. Of the Jews five times received I forty stripes save one. Thrice was I beaten with rods, once was I stoned, thrice I suffered shipwreck, a night and a day I have been in the deep; in journeyings often, in perils of waters, in perils of robbers, in perils by mine own countrymen, in perils by the heathen, in perils in the city, in perils in the wilderness, in perils in the sea, in perils among false brethren; in weariness and painfulness, in watchings often, in hunger and thirst, in fastings often, in cold and nakedness. Beside those things that are without, that which cometh upon me daily, the care of all the churches.” 2 Cor. 11:18-28.

No Works Could Justify Before God

When arraigned before his judges and accusers, Paul protested that he had done nothing worthy of death. He said that his conscience was void of offence toward God and toward men (Acts 24:16;25:11). But this was never his plea before God. His blameless life and holy ministry were not the basis of his right standing before God. So he declared: “I am not aware of anything against myself, but I am not there by acquitted [justified — K.J.V.]” (1 Cor. 4:4, RSV). He well knew that his justification before God was by grace alone, by the blood of Christ alone, and that it was not ever on the basis of what the Holy Spirit had done in him, but on the basis of God’s act of liberation on the cross in the Person of Christ (See Rom. 3:24, N.E.B.).

God’s people must be grounded on this gospel of justification before Heaven can entrust them with the gift of God’s Spirit, that they proclaim the truth in the might of the Spirit’s power. Yet with Paul they will still confess, “I am not hereby justified.” It requires God’s righteousness, all of His righteousness, to be accepted in His sight. That righteousness is found only in the Man Christ Jesus. We can rest our salvation on nothing less than His humiliation, suffering and death. His was not just the humiliation of a man, but of a God.  His excellence of character was infinite, for His earthly life was the embodiment of divine perfection. His sufferings were infinite, His death of infinite value. The sacrifice of Christ amazed the angels. It will be the science, song and wonder of the redeemed for eternity. Upon this one magnificent and unspeakable Gift we must base our right standing with God for time and for eternity. Praise God that there is such a solid ground of hope! What comfort to know that we need never ground our salvation on anything that is within us! And to teach us these things God gives the Holy Spirit.